In my Buster Posey player collection, I have some nice cards. Yeah, that might sound a little conceited, but I think we're all proud of our collections. I even detailed my nine favorite Posey cards at the time in a post a little while back.

I've made some additions since then, including a couple of relic cards. But my most recent score arrived in the mailbox today and it is officially my new favorite. 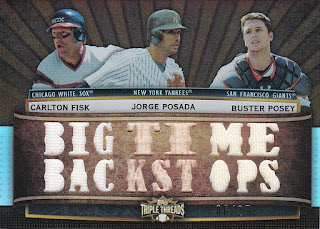 The Triple Threads thing is not a new thing to collectors, and I'm willing to bet that some will say I overpaid. But allow me to explain.

I don't have cards like this in my collection. Boxes of Triple Threads are way out of my price range. Growing up, with hobby shops few and far between (when they managed to stay open), I didn't have exposure to these products. And this is by far my lowest numbered Posey card yet. 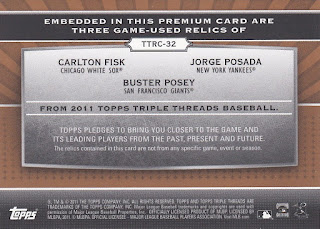 I'm not crazy about the Sepia tone (it seems too lackluster to me on what is otherwise a beautiful card), but I always liked Posada growing up, and Fisk was a catcher I tried to model my own game after on the field. Put those two on a relic card with Posey, and I'm there!

One thing that I noted, however, is the size of the relic area. It seems very, very small, and maybe that's because I've never seen one of these in person before. And I don't really mind - it is what it is, and if I wanted to split this card in half, I bet I would find a three full size swatches.

All I know right now is that I have a new favorite card in my collection. This also brings a worry along with it, however...a self-professed "common card" collector, I think I may have been bitten by the "high-end" bug, as I lost out on an auction last night, and am currently winning one for another triple relic that I hope to show off soon!

Thanks for reading my short, quick, and awfully proud post. Have a great rest of your night!

This title really has nothing to do with the content of the post tonight. I'm simply listening to a wonderful cover of Keith Whitley's classic "Don't Close Your Eyes", sung by a gentleman by the name of Dylan Scott. While I'm a self-professed "old school" country guy, I love Scott's vocals. Take a listen yourself, if you'd like:


So, if you're not sick of Matt Mantei cards yet, keep reading. While I have many collecting interests, 98% of my baseball card time lately has been dedicated to organizing and inventory. However, I've also pushed headlong into the quest to obtain every Matt Mantei card (including printing plates!) and took advantage of the recent COMC Summer Sale to pick up a few more of the lower-numbered and rarer cards of his at discounted prices. 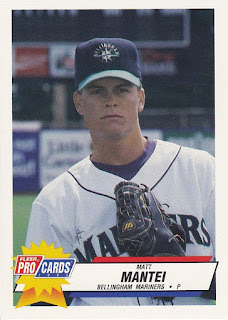 Well, they weren't all rare. But this 1993 Fleer/ProCards of a young Mantei with the Bellingham Mariners is a nice addition, and my earliest card of him to date. 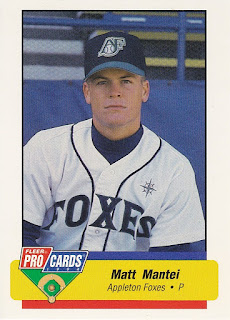 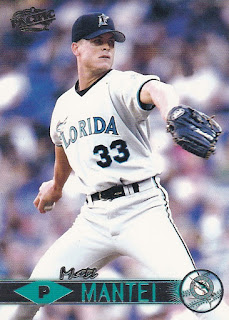 Why this parallel of 1999 Pacific is called "Platinum Blue" is a mystery that I will likely go to the grave without having solved. Regardless, it's the first of three 1999 Pacific cards needed for the collection. 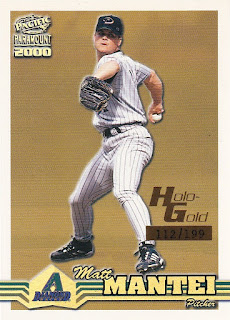 The 2000 Pacific Paramount parallels is really where I did some damage. I knocked out this Holographic Gold numbered to 199... 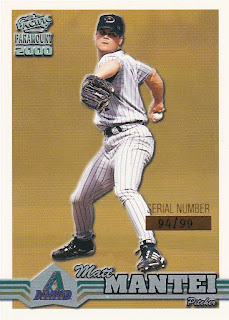 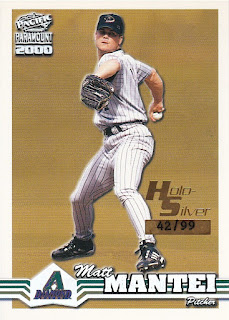 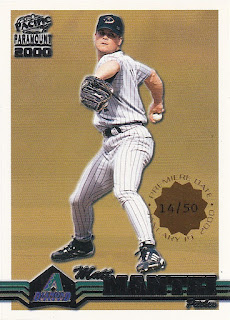 ...and the Premiere Date, numbered to 50! Very redundant, I know, but they actually look pretty sharp in pages together. I'm simply missing the Gold and Platinum Blue to have the full rainbow for this one! 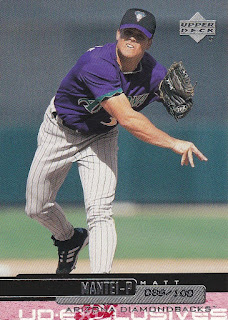 I also added the 2000 Upper Deck Exclusives Silver parallel number to 100. Tracking down the Exclusives Gold, however, could prove difficult - it's a 1/1. 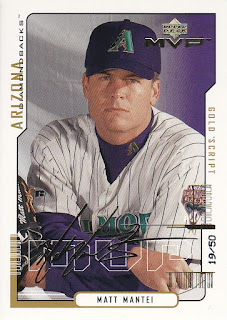 I'm also one card short of the 2000 Upper Deck MVP "rainbow", as I'm just missing the Superscript parallel numbered out of 25. But I was thrilled to pick up the Gold Signature version seen here. 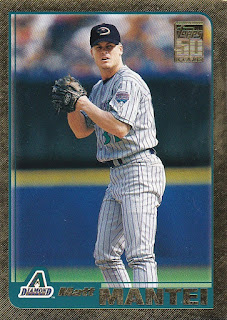 In addition, I added the final parallel needed for the 2001 Topps flagship run! I miss when the Topps flagship "Gold" cards were actually, ya know, gold. With a real serial number on the back, not some digitized crap. 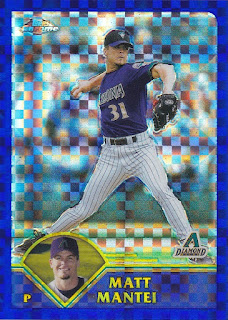 Finally, we wrap up with my favorite card of the bunch, an uncirculated XFractor from 2003 Topps Chrome. Numbered out of just 57, I thought for sure I'd have a much harder time finding this sucker, so I couldn't click "Add to Cart" fast enough when I saw it!

So that's how my COMC Summer Sale went! If you've made it this far, I assume that Mr. Mantei, despite having his career be over for over 10 years now, may have made a few new fans. I appreciate you all reading along, despite my on-and-off blogging presence. It's something I still enjoy doing when the opportunity arises, but I wouldn't have the desire if there weren't readers like YOU at least absorbing my content - it's up to to you to decide if you enjoy it!

Have a great evening.