No, not Bring Your Own Beer - although if you're kicking back on this Thirsty Thursday (or whenever you read this) and taking in a few adult beverages, I tip my cap to you. You probably earned it!

The BYOB here refers to "Build Your Own Blaster", a concept I've seen on the blogs once or twice and something I did (albeit inadvertently at first) last week. As I did last year, I ran a NCAA March Madness tournament challenge on the Trading Card Database, with the winner getting $15 to COMC on me, and second place $10 to COMC, also on me. At the same time, I cashed in myself and racked up 12 cards (11 I needed) for my own collection - shipped for less than the $20 blaster of 2019 Topps Series 1 would have cost me at Wal-Mart.

I still have a package from Remember the Astrodome I need to show off here, but I'm taking quick advantage of the fact that I'm putting away these cards to blog about them at the same time. So without further ado, let's get to it! 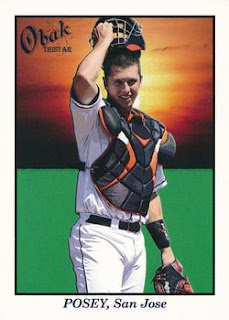 Most scans tonight are once again courtesy of the Trading Card Database. I'll show off what makes up the bulk of my order in a moment, but at the end I did a quick filtered search for early Buster Posey cards. 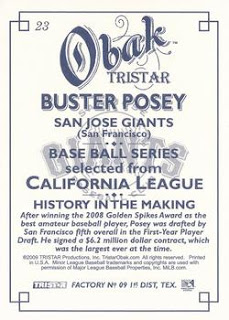 This 2009 TriStar Obak turned up at a reasonable price, so into the cart it went. I'm always happy to add early Buster Posey's to the Hoard, and this one is no exception. The price tag? $1.55

This one also was a late addition for an affordable price: 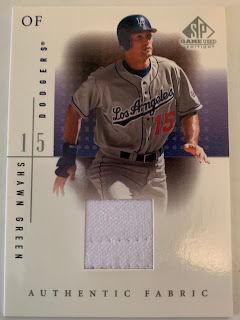 From 2001 SP Game Used Edition, this "Authentic Fabric" insert set me back a whopping $1.71. I like the stitching being part of this jersey piece as well - it adds a little character to a card and swatch that would otherwise be pretty blah.

The remainder of the order is made up of my COMC specialty: go to Matt Mantei, filter by lowest price first, and pick off as many cards that I need as possible for under $1.00. 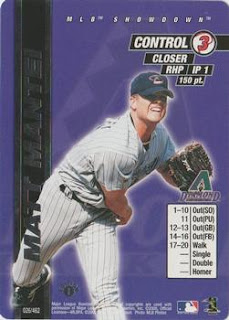 Not one that I needed...dammit Jason, this is why we have lists! I wasn't thinking and added this one to my cart when it's one that I already had. Luckily it was a mere $0.99. I'm sure I can find a good home for it with my dad though. 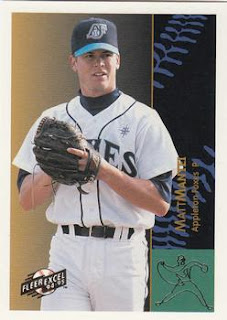 Pretty thrilled to add this 1994-95 Fleer Excel minor league Mantei to the collection. Appleton was in the Midwest League - I don't know for sure, but I think they may have become the Wisconsin Timber Rattlers. 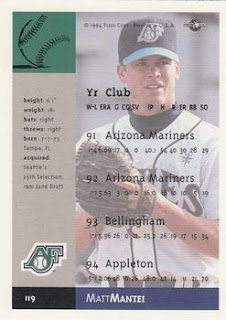 Minus the fact that they used the same picture on the back, I like the reverse enough to show it too. On the cheaper end of the spectrum, this was a $0.69 deal. 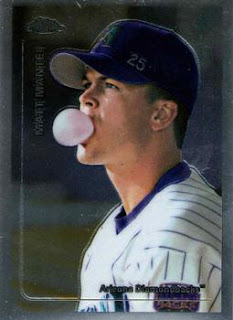 This 1999 Topps Chrome Traded and Rookies now joins it's non-Chrome counterpart in the Mantei collection - and only cost me $0.60. This scan I borrowed looks a little cut off at the top, but no worries - mine is in pretty good shape. 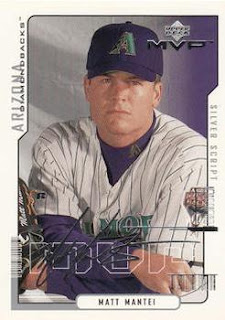 Another parallel for which I already had the base card for, this 2000 Upper Deck MVP Silver Script cost $0.78. I'm diggin' the patch on his left sleeve. 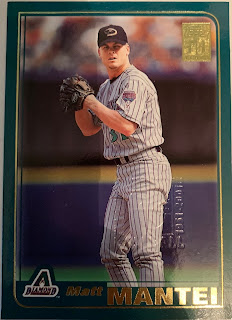 Excuse the poor picture on this one. I took it oddly in hopes that you can see it's not an extra copy of the 2001 Topps base card, but rather the Employee Edition parallel, as denoted by the embossed stamp on the front. This was one of those cards that I wasn't sure of the scarcity of, so finding it for exactly $0.85 is a win in my book. 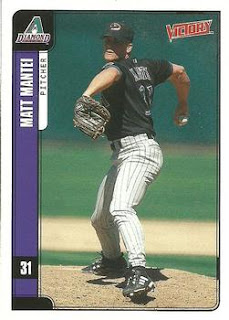 I always liked the Upper Deck Victory sets, and while this one reminds me more of a Collector's Choice set than Victory, it's another one to cross off the list, for a total of $0.85 as well.

This one is probably my favorite of the package. 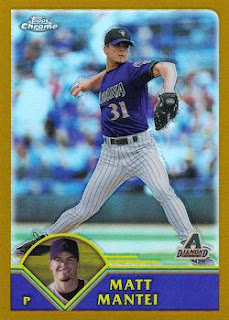 Numbered to just 499 copies, this Gold Refractor from 2003 Topps Chrome is a suh-weet edition for just $1.24. And the one I acquired is number 50 of 499. I'm not usually a sucker for particular serial numbers, but I do like a nice round one like 50 when I find it!

To wrap things up, here's the final three, all parallels from various 2004 sets: 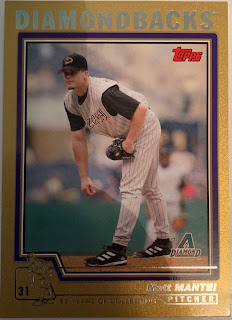 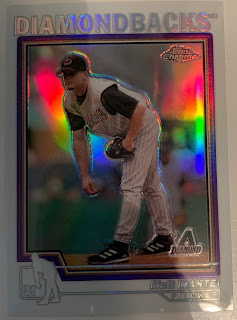 2004 Topps Chrome Refractor, which is a poor picture but the intent was to show off the rainbow-style refractor the way it looks in hand. $0.70. 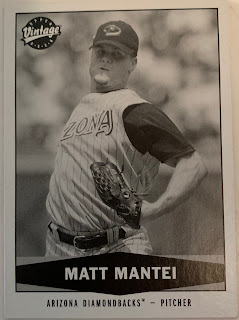 2004 Upper Deck Vintage Black and White joins the base card - and now I have the two card rainbow from that set. $0.95.

I should add that all of the above prices include an extra $0.25 for a toploader. Throw in $6.99 shipping and a little tax, and you have a grand total of $19.92. I gotta say, I'm pretty pleased with all of that for under a Hamilton.

And now I have 41/151 Matt Mantei cards, good for 27.2% and the number one ranking on the Trading Card Database! Actually I already had the #1 ranking, but the lead has strengthened!

Think you can help add to my Mantei collection? Check out my wantlist here and let's talk! I appreciate it if you've read all my rambling tonight. Hopefully this weekend I can get another post or two up and work on some packages that I really need to get out to other collectors (Night Owl, Marc, Billy Kingsley, and probably a few more).

However, it's a very real possibility that I don't post - and if not, have a Happy Easter, and thanks for reading!