This post has taken me well over a week to write. Between getting settled in, scanner issues (the darn thing won't scan straight; I'm hoping I didn't damage it in the move), and going out of town consecutive weekends, I've had to borrow images and write a paragraph at a time here and there when I get to it. This post doesn't do justice to the package that I'm writing about.

I think at this point, most of us in the blog-o-sphere are aware of Wes Moore, aka Jay Barker Fan, and more well known these days as the man and myth behind Area 40. If you haven't yet joined the fun following along Area 40, I suggest you do so immediately, because not only is Wes having giveaways almost weekly (the results of one we will see here momentarily) this last "Cardboard Hurrah" coming up next year will not only blow Hazel Green, Alabama skyward but might also be the single coolest thing I've seen happen since starting this blog.

I came along a little too late to get to know Wes well. However, I followed along frequently as he just let Bob Walk the Plank (RIP to the blog) have it, sending package after package to the now-defunct blog. So when Wes announced his comeback recently and offered up a pair of vintage beauties as a giveaway, I made my entry.

And what do you know. I won. 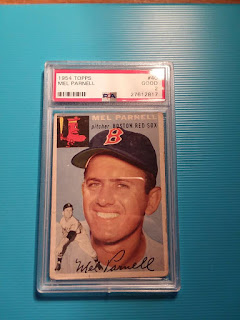 Since I don't have a scanner with the ability to scan graded cards, we are left with poor cell phone photographs for these. Still, adding this 1954 Topps Mel Parnell card, even with a grade of 2, is pretty awesome. When this fell out of the bubble mailer, it became the oldest card in my collection. I absolutely dig the Red Sox logo on the front of this one. 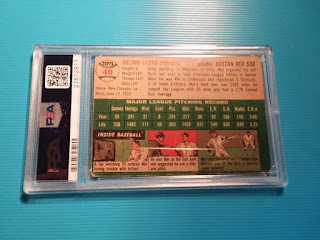 Here's the back. The little cartoon at the bottom made me chuckle. Obviously this card is in rough shape, but hey, it's 64 years old - cut it a break!

The second graded vintage card was this: 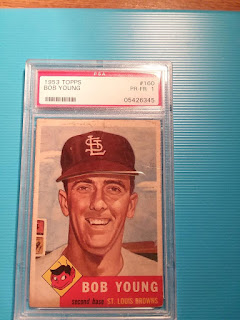 The first St. Louis Browns card in my collection is now the oldest one as well, as it passes the Parnell by one year! I think the Brownie logo on the front may be what led St. Louis University to their logo today, as I want to keep calling it a Billiken! 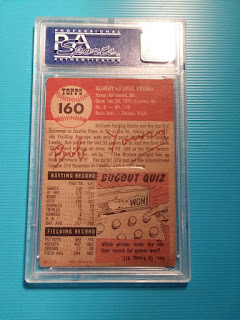 Here's the back of the Young card. It is a grade lower (a 1) but still an absolutely awesome piece of history to add! I'll have a bit more on these cards at the end of the post, but first, anyone who knows Wes knows that he adds extras to his packages.

After the first email to give him my shipping address, it was apparent that he did some digging, and after asking a few questions, I knew he was tossing some extra stuff in the mailer. What I didn't know was how powerful the punch would be! 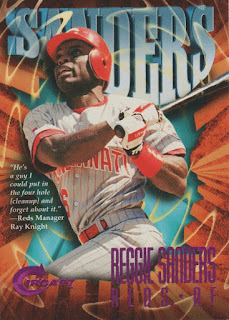 At first glance, this 1997 Circa Reggie Sanders looks like the tamest of the bunch (and was definitely a need!) until you turn it over... 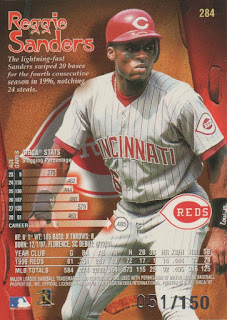 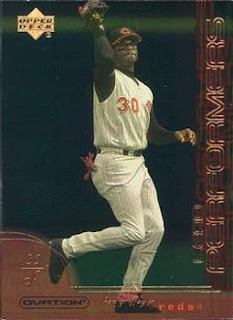 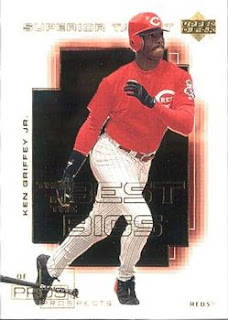 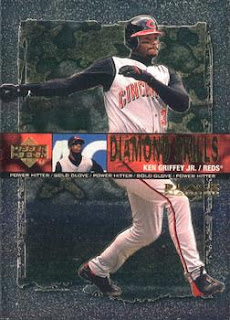 Wes also hooked me up with three Griffey Jr. inserts from around the turn of the century (all images here borrowed from the TCDB because I'm a little short on scanning time). I've never been a big Griffey collector (I liked him well enough, just wasn't around for enough of his career to truly have the desire to collect him), but I'll take any cards of The Kid with the Redlegs that I can get! 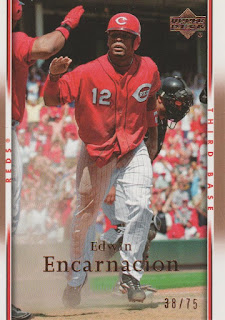 This Edwin Encarnacion Gold parallel from 2007 Upper Deck marks my first such card. As you can see in the lower right, this one is numbered 38/75. 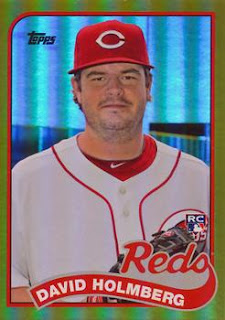 Another scan I'm borrowing from TCDB is this David Holmberg gold parallel from 2014 Topps Archives. Numbered to 199, Holmberg is another example of a Reds pitcher that looked like he might help us turn the corner...until he didn't. 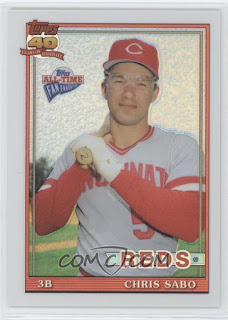 I had to borrow this image of a 2003 Topps All-Time Fan Favorites Chris Sabo refractor due to more scanner issues. This card is absolutely stunning in hand, and my copy happens to be numbered 44/299. 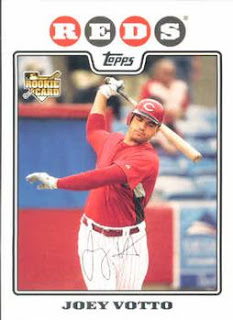 Borrowed this scan from the TCDB. Thanks to Wes, I can finally cross Joey's 2008 Topps RC off my PC wantlist! Well, I will once I get it a bit more organized. A card I've wanted for a while, I'm extremely happy to add this one to my collection.

Side note, funny story: I recently got a kitten. His name? Votto. That's how much JV means to Reds fans.

The final card from Wes gives me a bit of dilemma: 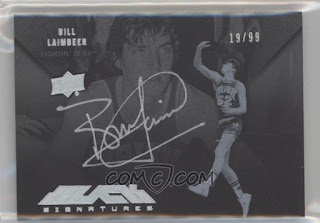 Again, as you can see, I needed to borrow a COMC image. My copy of this card, via Wes, is numbered 72/99. See, when our friend running Area 40 was putting a package together for me, he inquired about my collecting Notre Dame basketball. I casually mentioned that as a Notre Dame fan, I love the Irish but I'm not a big basketball guy. However, I countered with the fact that my American Legion baseball team hosts a sports memorabilia auction every spring as a fundraiser, and a Notre Dame basketball item may sell well there.

Wes sent me this! How in the world is an autograph collector like myself supposed to let this puppy go? I don't have a Laimbeer autograph, so it's a no brainer that I'd keep it for my collection, right? Well...hard to tell in this scan, but these cards are thick. Like, 6 or 7 regular cards thick. I don't like putting cards that thick into pages, so...the future of this one is still up in the air. Regardless, it's extremely appreciated, much like the rest of this package!

Wes, thanks for the extras and the generous vintage giveaway! I'll round up a few packs to send your way for your stash before the big 4-0 hits next year!

I mentioned earlier that I was going to bring those graded vintage cards up again. And here's why: they've officially motivated me to start a new sub-collection. That would be, of course, graded vintage. For my intents and purposes, I'm calling vintage pre-1968 at this time. 50 years old is definitely vintage. I'm not going to actively seek out a ton of these cards, but if I can find one fairly cheap here and there, I'll add it.

I'm not a big graded guy, but cards this old need to stay protected. That being said, I really need some advice from those of you who do have plenty of graded vintage in your collection. How do you store them? Are there special boxes you use? Do you use whatever you can get your hands on? Let me know in the comments!

As always, thanks for reading my blog, and have a great Sunday!

Continuing the Autograph Appreciation series today with my third of five soccer signatures. Since we just moved into our new place in Indiana, and I don't have wifi or the scanner hooked up yet (I'm actually typing this at my parent's just 20 minutes up the road) I figured this was as good of a time as any to get another AA post up, as I already had this card scanned. So, who's our subject today? 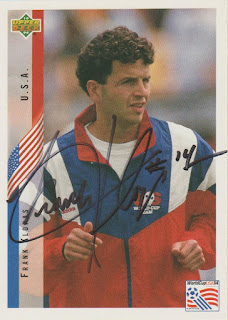 Another card just like Chris Henderson (my last AA post) that I don't have records of when I sent it and/or received it back. But that's a small detail that doesn't apply much here. Let's take a look at the life and career of Frank Klopas, shall we?

Fotios Klopas was born September 1, 1966 in Prosymna, Greece. Moving to the States at the age of 8, Klopas received his U.S. citizenship upon his 18th birthday. Attending Mather High School in Chicago, Klopas left a mark leading Mather to the Chicago Public League championship as a senior. Skipping college, Klopas signed with the Chicago Sting of the NASL, but an injury led to him missing the team's season.

Beginning the next season, in 1983, Klopas played for the Sting in the indoor MISL. He would make 140 appearances up to 1988, scoring 62 goals and being named as a second team All-Star during the 1986-87 season. Leaving Chicago to go back to Europe, Klopas would spend 1988-1994 playing for the Greek team AEK Athens FC, appearing in 49 matches and netting 6 goals.

After tearing his ACL in 1991 and dealing with infections after, Klopas was limited for two seasons. In 1992, Frank signed a contract with the United States Soccer Federation, but would return to Greece following the 1994 World Cup, latching on with Apollon Athens until 1996 (10 games, 0 goals).

When Major League Soccer came calling in 1996, Klopas answered and was assigned to the Kansas City Wizards, scoring 7 goals in 54 appearances with the team in two seasons. After being traded to the Columbus Crew, the Crew immediately swapped him to the Chicago Fire (before Klopas played a single minute in the Yellow and Black). The Fire was on the beneficial end of this deal, as Frank helped the Fire win the MLS Cup and the U.S. Open Cup in 1998; Klopas was the scorer of the Golden Goal against the Crew in the Open Cup Final, giving the Fire a 2-1 victory in overtime. He would retire from professional soccer following the 1999 season. In 2004 he was selected into Chicago's "Ring of Fire" and in 2005, became a member of the Illinois Soccer Hall of Fame.

Klopas had a career with the U.S. National Team spanning from 1988-1995, in which he appeared in 39 matches and amassed 12 goals. Despite a solid career, Klopas did not appear in the 1994 U.S. World Cup run (which is the World Cup the card set shown above was produced for), amid a fair amount of controversy.

After retirement, the Fire hired Klopas as their Strength and Conditioning coach, where he remained for one season (2000). After a few years off, Klopas was named the head coach/GM of the MISL's expansion franchise, the Chicago Storm. Despite leading the team to a playoff berth in 2006, Klopas resigned after the season. Rejoining the Fire in 2008 as their first Technical Director, Klopas took over the managerial role in May 2011, remaining in the position until 2013. Finally, his soccer roller coaster took him to Montreal, where he was the head coach of the Montreal Impact until 2015. He currently lives in Chicago, with his wife Sophia.

If I had to guess, I would say that I got this card signed by Mr. Klopas sometime during his tenure at the Fire head coach, although it was before I kept records and really have no way of telling for sure. Regardless, it's a great card to have in my collection, especially of someone who has such a legacy in the Chicago market (where I'm not far from).

Hopefully you enjoyed this stroll through the history of Frank Klopas. As I mentioned at the beginning, this was my third of five soccer autographs to cover in this series, before we start on NASCAR (unless anyone has any soccer autographs they want to swap; I'm always willing to trade for signature cards!). My last autograph post about Chris Henderson ended up with over 200 views, one of my highest totals so far, so either people are enjoying reading these or Blogger has a few issues! Thanks for reading, and have a safe and happy Fourth of July!